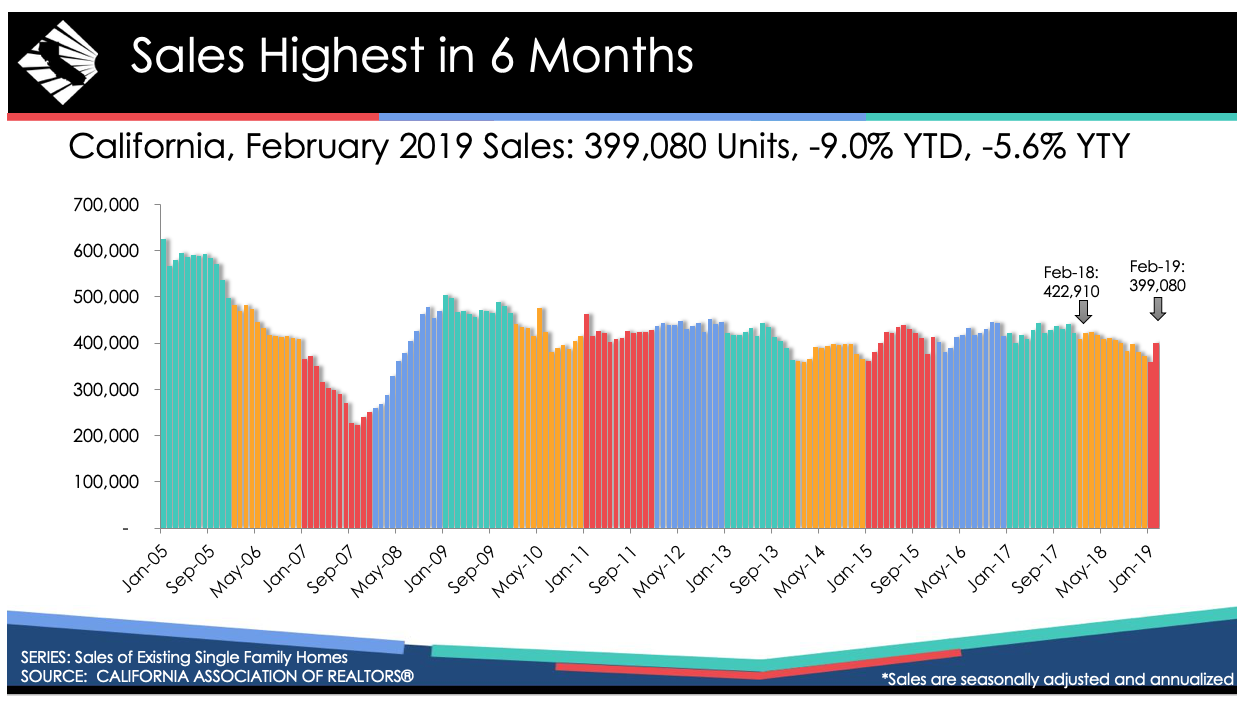 California home sales bounced back in February after hitting the lowest sales level in more than 10 years the previous month, the CALIFORNIA ASSOCIATION OF REALTORS® (C.A.R.) reported. February’s annual sales level was the highest in six months, and the monthly growth in sales was the highest since January 2011.

Closed escrow sales of existing, single-family detached homes in California totaled a seasonally adjusted annualized rate of 399,080 units in February, according to information collected by C.A.R. from more than 90 local REALTOR® associations and MLSs statewide. The statewide annualized sales figure represents what would be the total number of homes sold during 2019 if sales maintained the February pace throughout the year. It is adjusted to account for seasonal factors that typically influence home sales.

“Lower interest rates and stabilizing home prices motivated would-be buyers to get off the fence in February,” said C.A.R. President Jared Martin. “With mortgage rates reaching their lowest point in a year, housing affordability improved as buyers’ monthly mortgage payments became more manageable. Instead of the double-digit growth rates that we observed a few months ago, monthly mortgage payments increased by 2.7 percent, the smallest increase in the last 12 months.”

The statewide median home price dipped 0.6 percent to $534,140 in February from a revised $537,120 in January and was up 2.2 percent from $522,440 in February 2018. February’s price was the lowest since February 2018 and was primarily attributed to seasonal factors, as February typically marks the lowest price point for the year.

“While February’s sales rebound is welcome news, the market will likely remain constrained as sellers and buyers sort through the realities of today’s market,” said C.A.R. Senior Vice President and Chief Economist Leslie Appleton-Young. “With the market about to kick off its homebuying season, buyers have a window of opportunity in the upcoming months as interest rates remain stable, there are more properties on the market to consider, and prices are more attractive.

Other key points from C.A.R.’s February 2019 resale housing report include: