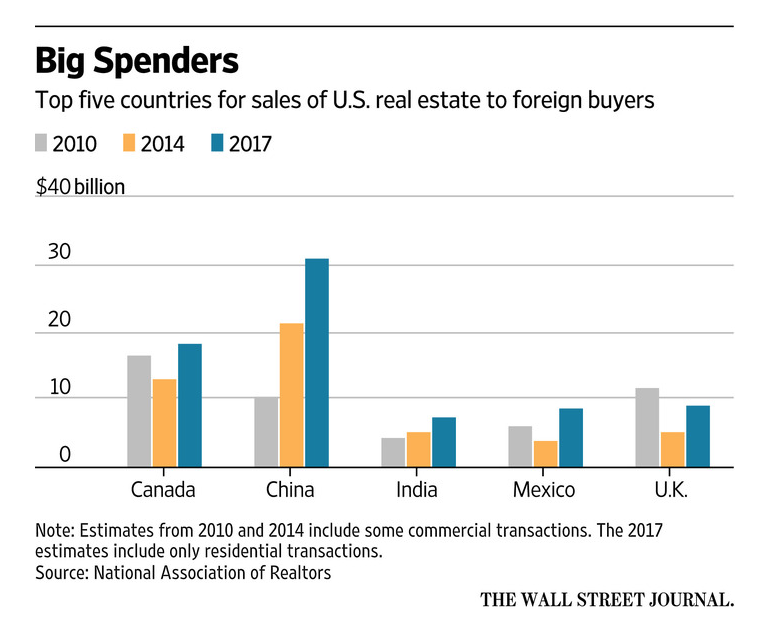 The Wall Street Journal has reported the following:

In all, foreign buyers and recent immigrants purchased $153 billion of residential property in the U.S. in the year ended in March, nearly a 50% jump from a year earlier, according to a National Association of Realtors report released Tuesday.

That surpassed the previous record for foreign investment set in 2015, when foreigners purchased nearly $104 billion of U.S. residential property.

The dramatic increase was unexpected given the strong U.S. dollar, turmoil in the political arena and restrictions on Chinese buyers looking to take money out of the country, all of which were predicted to damp demand.

Supply in the U.S. is already severely constrained. The number of homes on the market has fallen year-over-year for 24 consecutive months, according to the Realtors association, making the most-recent spring selling season one of the most competitive on record.

Builders, squeezed by labor shortages, zoning restrictions and a lack of available lots in prime locations, haven’t been able to construct enough homes to keep up with demand. U.S. starts for new homes and apartment units are still at just 60% of their 50-year averages, according to Ralph McLaughlin, chief economist at Trulia.

Those factors have fueled price increases in coastal markets that could be hard to sustain, especially if foreigners ultimately pull back, economists said.

Average home prices in San Francisco have more than doubled since 2009, according to the S&P CoreLogic Case-Shiller Indices, which track home prices across the U.S., though recently the market has slowed as prices have risen beyond what most buyers can afford.

Across the U.S., home prices rose 5.5% in the 12 months ended in April, according to Case-Shiller. Home prices hit a record in September and price growth has accelerated in almost every month since.

The recent surge in foreign buying was driven largely by Canadians flocking south to escape their own overheated real-estate markets. U.S. home prices are starting to look like a bargain compared with Vancouver and Toronto, where prices rose nearly 30% in the year ended in March. The gains slowed to a 6% year-over-year increase in June.

“There’s the flashing red exit sign going ‘It’s time to get out now,’” said Brent Leathwood, a broker in Florida who said he is seeing an uptick in Canadian buying.

The real-estate boom up north also helps give Canadians the cash to invest in vacation properties to the south. Mr. Leathwood said he recently worked with a couple who flew down from Vancouver.

“They’re shocked at what $300,000 or $400,000 will buy them,” he said. In Florida they can get a detached single-family house in that price range, while in Canada even an 800-square-foot condo is roughly twice that much, he said.

Foreign buyers tend to purchase more expensive homes than their local counterparts. The median price for a home purchased by a foreigner was more than $300,000, compared with roughly $235,000 for all existing homes sold in the U.S., according to the National Association of Realtors.

After dipping in 2016 to nearly $9 billion in sales, transactions involving Canadians this year more than doubled to $19 billion, a new high.

“Given the price appreciation that has occurred in those two cities, they have money to spend,” Mr. Yun said.

Foreign buyers continue to make up a small share of the U.S. market overall, but in some places they are a significant enough force to help explain why prices are rising so rapidly.

Purchases by foreigners accounted for 10% of U.S. existing-home sales by dollar volume in the year ended in March, up from 8% in 2016.

Foreign buyers are disproportionately concentrated in a handful of states, with Florida, Texas and California together making up 46% of foreign buying activity, the report said.

Still, Mr. Yun said, the major factor driving rapid price gains is a lack of new-home construction that is leading to a dearth of supply.

“The way to assure more affordable homes is to build more and not to limit the demand. The better approach would be to increase construction,” he said.

Chinese buyers remained the largest purchasers of U.S. homes by dollar volume, with $31.7 billion worth of purchases in the year, followed by Canadians, Britons, Mexicans and Indians. The bulk of buyers from China, India and Mexico had recently moved to the U.S., while Canadians and Britons were mostly buying second homes.

Kerry Lynn, a broker in New York City, said she is seeing more Canadians buying investment properties because they see Manhattan prices as a relative bargain.

“They’re completely priced out of Vancouver,” she said. “They’re saying Toronto is getting way more expensive, too.”